You are here : HomePublicationCalendar EventJNE Declares Happy Day Together
Share : 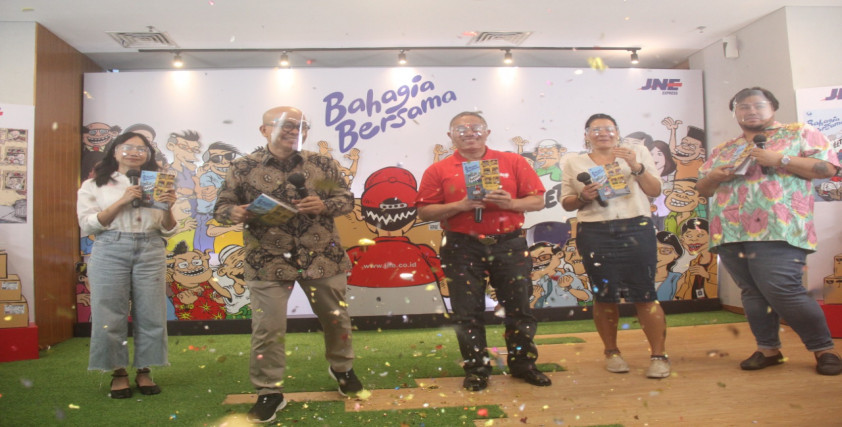 September, 2021 - JNE is grateful that until 31 years still share happiness with loyal customers as well as society, especially during the current pandemic. Starting from the JNE tagline that is always carried, "Connecting Happiness", JNE declared a Happy Day Together which was marked by the launch of a book entitled “Bahagia Bersama” on Tuesday 7 September 2021.

"Sharing happiness needs to be done as much as possible by everyone, even in a narrow condition," added the well-known literacy activist who is familiarly called Kang Maman.

Muhammad Misrad, who is familiarly called Mice, as the cartoonist who helped make the illustrations for the “Bahagia Bersama”, said, “It is a very fun challenge to be part of the book’s composition. The principle of sharing so that everyone can be happy together must be conveyed differently so that the message can be received by all groups and all ages, even for children”.

It is a true story that is written about sharing happiness which then brings a massive change. Especially, for anyone who is in or connected with the national express delivery and logistics service company of JNE. The principle of sharing has been something that JNE has been running since it was founded more than 3 decades ago on November 26, 1990.

M. Feriadi Soeprapto, President Director of JNE, said, "In running a business, JNE has the tagline "Connecting Happiness" which means delivering happiness. The meaning is very broad, so when speaking about JNE, it is not only about sending packages but in various aspects of life. "Bahagia Bersama” is the intended result of the principles of Sharing, Giving and Serving that JNE has been running so far".

To enliven the Happy Together Day, JNE also organizes various programs, including activation through the official JNE_ID Instagram account with the theme "The Unsung Hero". This quiz invites netizens to tell the good things that have been experienced and the chosen winner will get an e-wallet with a total prize of 10 million rupiahs.