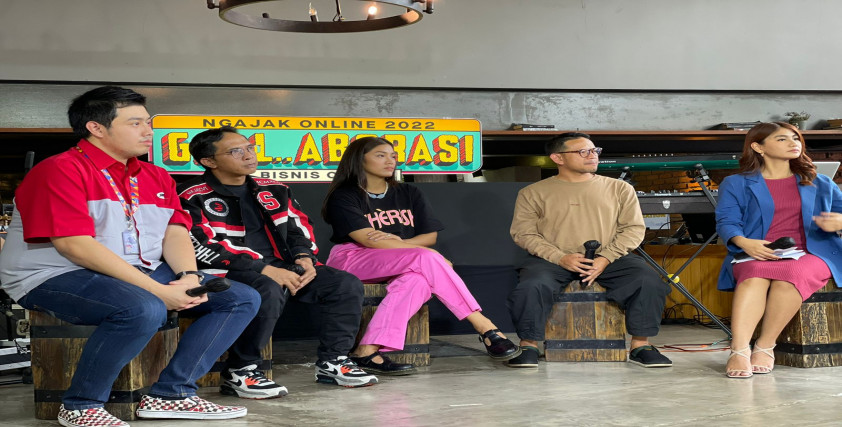 Bandung, September 2022 - The never-ending digitalization trend drives MSMEs players to compete in marketing innovation in social media. Quoting IdEA’s data, MSMEs that had entered e-commerce were only 11 million out of 59.2 million MSMEs players from May 2020 to June 2022 with a transaction value of US$ 53 billion.

JNE as a logistic and delivery service company supports MSMEs digitalization with various programs, such as through JNE Ngajak Online, Goll..Aborasi Bisnis Online Edisi Spesial Kota Bandung. This event was opened lively with the performance of Manshur Angklung X Henry First with Adinda Putri Thalita as the host.

Edi Santoso as the Director of JNE opened this event by congratulating Bandung city on its 212th anniversary which fell on 25 September 2022. “May Bandung can be one of the best smart cities in Indonesia. Supporting the vision, JNE would not only engage but also drive MSMEs to be competitive. Through this event, we expect integration and collaboration with MSMEs to be established.”

The fashion trend, especially among the youth, showed constant changes, however, Hijack Sandals and 3Second became two apparel brands that still showed their performance and existence until now with attractive product innovation.

Zaky as the Managing Director of Hijack Sandals said “10 years we have run our business. Starting from organizing workshop and recruiting friends as employees, we started evolving from 2014 to do digital marketing”.

Starting from producing various website campaigns, Zaky said his part attempted to collaborate to have his products known by international consumers.

There is no one unfamiliar with the apparel brand 3Second, with 300 industrial points this brand became one of the most sustainable apparel brands in 2001. Adopting digital marketing in 2010, Hendri Sase as the Manager of Promotion of 3Second that this time started developing multichannel marketing.

“Today our marketing is integrated between offline and online and even grows to Bandung surroundings”, he said.

3Second did not cease innovating, and one of its most interesting breakthroughs was application launching for consumers to do transactions more easily and collaboration product launching “Change is sure to occur, thus 3Second keeps innovating, including through collaborating with Mobile Legend and other public figures. In addition, we also collaborate with JNE expedition for delivery in support of distribution activities”, said Hendri.

Different from the long-established 3Second and Hijack Sandal, Annisaacaca as the Creative Director of Cherish The Love who also attend the event proved that the brand that was born during the pandemic era could also grow rapidly and produce the astronomical amount of assets.

“That it was born during the pandemic, our marketed products are ones that can be used daily, and besides clothes, we also released perfumes with unique variants.”, said Caca.

Supporting Bandung MSMEs’ effort to operate, Iyus Rustandi as the Branch Manager of JNE Bandung said “We are optimistic with the current digital opportunity, thus MSMEs capacity can keep increasing, one of which through the support of one of JNE services, Roket Indonesia”.

For information, Bandung is the 44th city of the webinar event JNE Ngajak Online 2022 – Goll…Aborasi Bisnis Online was performed in 2021 in 60 cities throughout Indonesia.