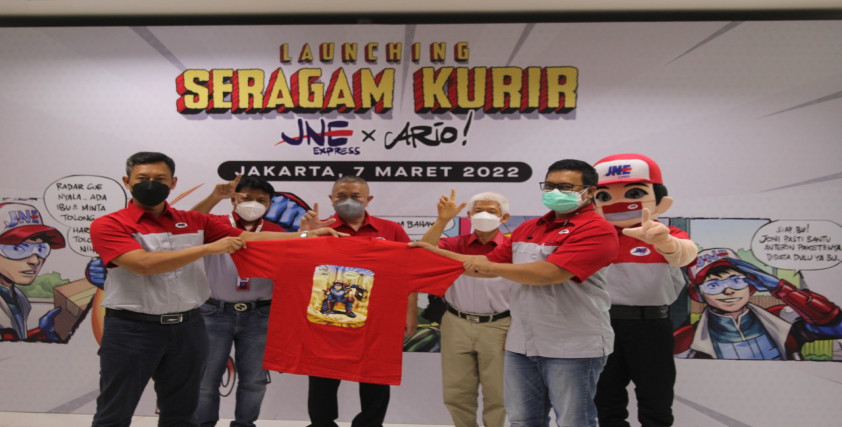 Jakarta, March 20, 2022 — The uniform appearance of the newest JNE knights by Ario Anindito, a skilled comic artist whose work has been trusted by many huge entertainment businesses in America, like Marvel, DC, and others, is both fresh and iconic. A total of 25 JNE knights rode in a convoy wearing red t-shirts with classic super courier drawings gracing the new uniforms, which were introduced in person at the JNE Central Office, Jl. Tomang Raya No. 11, Jakarta (7/3/2022).

Ario frequently draws inspiration for his characters from his daily life, which he then incorporates into his art. This is also illustrated in Ario Anindito's JNE X work, where Joni Super Courier is depicted as the JNE knight who is always required by the community to deliver parcels on a daily basis.

"Apart from the idea that this courier is a hero for people who need extra time and energy, this Joni icon is a courier who is ready to help, for example, MSMEs that require delivery for the products they sell, or even the simplest one is a child who cannot send gifts to his parents due to the pandemic, so Joni is equipped with equipment with superpowers that can help his work to be more ontime and faster, and help others according to the values that exist at JNE."

M. Feriadi Soeprapto, President Director of JNE, stated in his remark, "In accordance with JNE's tagline, Connecting Happiness, the depiction of JNE knights is not just carrying parcels, but JNE must also be able to serve the society as much as possible." Furthermore, Feriadi stated, "JNE, as an Indonesian firm, is proud and appreciates the efforts of this nation's youth who may also paint JNE's tale in order to continue to deliver happiness."

Previously, JNE and Ario Anindito collaborated by producing the comic strip JONI Super Courier in the regard to JNE's 31st anniversary in November 2021. Beginning on March 12, 2022, the JNE X Ario Anindito uniform will begin to be used officially in Jakarta, particularly on Saturdays and Saturdays. Sunday, and soon in other JNE branches throughout Indonesia. The objective is that in addition to showing respect to the JNE knights who have become shipping heroes, the usage of this uniform will make the JNE knights look neat with a casual style on holidays.