You are here : HomePublicationJNE Provides a Bonus of Tens of Millions of Dollars for COSMO JNE FC Futsal Silver Medalists at the 2021 Vietnam Sea Games
Share : 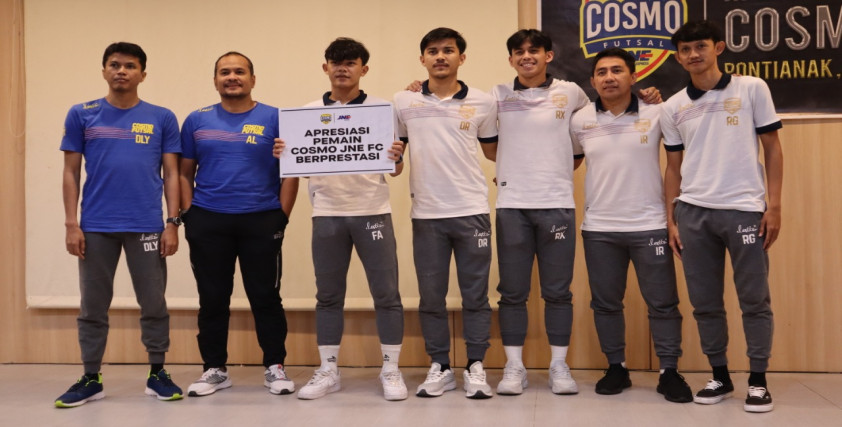 JNE remains committed to offering the greatest possible benefit to the community. JNE regularly contributes to different spheres of society, including health, education, sports, and others, in addition to focusing on corporate development and innovation. JNE, the major sponsor, provided appreciation in the form of bonus splashing in the tens of millions of dollars for the players and Cosmo JNE Futsal Club executives who are members of the Indonesian Futsal National Team and had previously won silver medals at the AFF Futsal Cup and the 2021 Sea Games.

The Indonesian Professional Futsal League 2021/2022 will shortly enter its second round, and Cosmo JNE FC is ready to embrace the match with zeal in order to defend its position as the best futsal team. On Saturday (18/6/2022), Cosmo JNE FC will play the Warriors United team of popular YouTuber Atta Halilintar at Pangsuma Sports Center in Pontianak. Furthermore, Cosmo JNE FC, led by Coach Denny Handoyo, will field his strongest team against IPC Pelindo (19/6), Halus FC (25/6), and Bintang Timur Surabaya (26/6).

The Cosmo JNE FC match, nicknamed The Yellow Submarine, is particularly interesting since it will meet the United Warriors, who now have the top world-class player 6 times, notably Ricardinho, a Portuguese national. Ricardinho will be the focal point of every match, which will be both his debut and a challenge in the Indonesian futsal world, and the match will now be broadcast live.

JNE's VP of Marketing Eri Palgunadi stated, "JNE wants to continue to support the nation's children." "As an original Indonesian logistics company, JNE will continue to support the progress of the nation's children, both SMEs, sports, education, and the economy according to the tagline "Connecting Happiness" by providing the best service and providing the widest benefits to all Indonesian people."

As the owner of Cosmo JNE FC, Akbar Pera Baharudin or Personal Adjutant stated that JNE is the primary sponsor for Cosmo JNE FC to play in the 2021/2022 Indonesian Professional Futsal League competition season. "The hope is to offer the best results in every match and become the champion of the Indonesian Professional Futsal League in the 2021/2022 season with maximal and extraordinary support from JNE as the largest logistics company in Indonesia," he stated.