You are here : HomePublicationJNE Delivers 3.2 Tons of Aid to Cianjur Regency Government
Share : 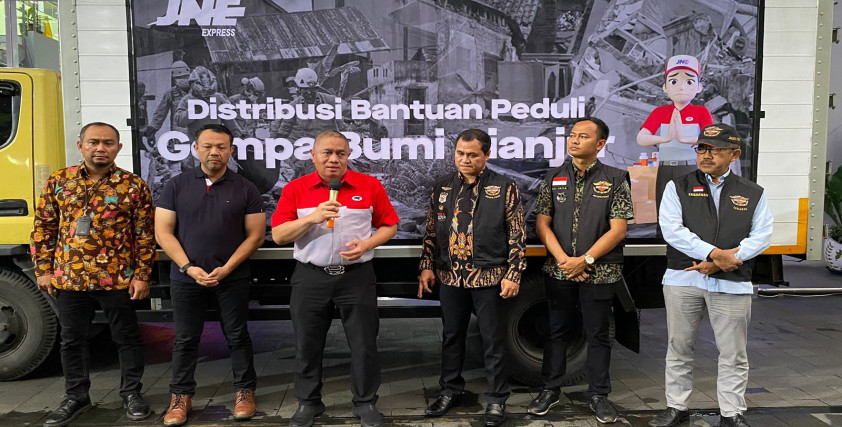 The earthquake in Cianjur, West Java, which took 327 lives and damaged property, compelled JNE to act on Friday (2/12/22) by donating through the Cianjur Regency Government.

The series of activities began on Thursday, 1 December, with the release of aid at the JNE head office, Jl. Tomang Raya No. 11, Central Jakarta, by JNE President Director, M. Feriadi Soeprapto, along with Samsul Djamaludin, JNE's VP of Quality Assurance and Facility, and Donny Syahrullah, Management Division Head, as well as colleagues from the HDCI Jakarta community and Delta Adventure. In 2022, 3.2 tonnes of help were distributed in the form of groceries, medications, tents, and other necessities.

In his remarks, M. Feriadi Soeprapto as the President Director of JNE said that the donations given by JNE were part of practicing the company's values, which had been going on since JNE was founded 32 years ago, namely sharing, giving and supporting.

"We hope that this assistance can provide benefits to recipients, especially victims of natural disasters in Cianjur. I also pray for the areas affected by the earthquake to recover soon, and for the people there to be given the courage to face this from Allah SWT," said M. Feriadi.

Meanwhile, Budhi Rahayu Toyib, S.Sis., MM., MT, Cianjur Regency ASDA 2, expressed his gratitude and appreciation for the humanitarian aid provided by JNE via the Cianjur Regional Disaster Management Agency. "Hopefully, this support will ease our brothers and sisters who have been impacted by natural calamities as a result of the earthquake that occurred some time ago," he said. "Thank you JNE, for the many activities carried out to help Cianjur Rise," he added.

Apart from handing over the relief to the Cianjur Regional Government, the activity proceeded with the distribution of aid by the HDCI Jakarta community, Delta Adventure, and JNE knights to villages in Cianjur's distant areas that were difficult to reach and had not been touched by aid.

"With JNE's capabilities in the field of delivery services, in addition to various assistance in collaboration with various parties, JNE also implements the JNE Cares for the Cianjur Disaster program, wherein JNE provides convenience in sending relief goods for victims of the Cianjur disaster by freeing shipping costs in the period 22 - 30 November," said Iyus Rustandi, Branch Manager of JNE Bandung. "A total of 38 tons of aid from all Indonesians has been received and handed to Cianjur inhabitants in need," Iyus concluded.