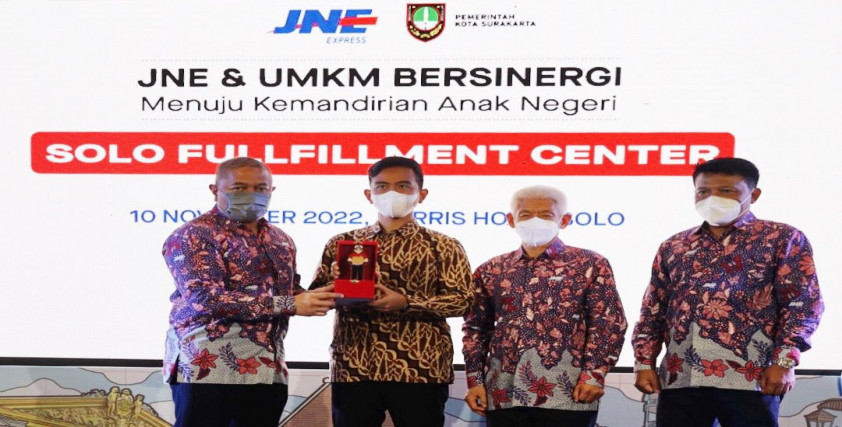 JNE celebrated its 32nd anniversary with a series of activities in numerous places. Surakarta, often known as the City of Solo, will host one of the events. JNE organized an activity on Thursday, 10/11, with the subject "JNE & UMKM Synergize Towards Independence of Country's Children." More than 100 Solo Raya MSMEs participated in this program, which was held at the Harris Ballroom Convention & Hotel Surakarta. A business talk program titled "The Role of Logistics in Making Effective-Efficient Business" was held, with keynote speakers Hasmeliyani, Head of National Sales JNE, Joko Porwono, UMKM Creative Space & Social Media Activist, and Agus Suryono, Brand Owner Suryo Art. Suryo Art is a UMKM that makes crafts and is now manufacturing official G20 items. During the talkshow's break, Ivan Gunawan, a well-known Indonesian designer and entrepreneur, greeted participants online and gave ideas on how their products as local brands might be recognized internationally.

On this occasion, the Mayor of Solo, Gibran Rakabuming Raka, welcomed the participants of the business talk show as well as the MSME tenants who were there with their individual products. The Mayor of Solo, known as Mas Wali, was greeted personally by the President Director of JNE, M Feriadi Soeprapto, who was joined by two JNE directors, Chandra Fireta and Edi Santoso, as well as JNE Regional Central Java-DIY officials.

M Feriadi expressed his appreciation for the Surakarta City Government's support for MSMEs in Solo City, particularly the activities held by JNE on that day, in his remarks. "As a domestic subsidiary company, JNE recognizes that JNE's nearly 32-year journey cannot be separated from MSMEs; for this reason, we are committed to continuing to encourage the growth of MSMEs and, in keeping with the theme of JNE's 32nd anniversary this year, namely 'Rising Together,'" said the President, who received the title of Best CEO 2022 Awards Courier Category.

Bambang Widiatmoko, Head of Regional Sales for Central Java-DIY, also stated that JNE Solo would like to announce the Solo Fulfillment Center on this occasion. Specifically, service fulfillment, which covers a variety of amenities for MSMEs. These services include warehousing, a 24-hour warehouse management system, packing, and product delivery. "That manner, the owner or seller of the brand can save on warehouse and HR rental fees because everything would be handled by JNE," Bambang explained. In addition to this activity, he stated that JNE Solo offers a 30% discount on regular services from Solo to destinations throughout Indonesia as a tangible manifestation of JNE's support for MSMEs.

In addition, as a form of gratitude towards the 32-year Anniversary, JNE provides compensation to orphans and poor people in Solo Raya. JNE distributed 1000 education and worship equipment kits to orphans, dhuafa, and those affected by Baznas' Covid-19. Furthermore, JNE gives cash compensation in the amount of Rp. 220,000,000, with details of Rp. 100,000,000 for orphans and impoverished people and Rp. 120,000,000 for Baznas Soloraya. M Feriadi Soeprapto symbolically handed over this support to Muhammad Qoyim S, Sos, Msi, Head of the Surakarta City Baznas.